There are a number of research projects ongoing within the Martin group. Common to most of these projects is the application of synthetic organic chemistry in the development of biologically active compounds that are relevant to human disease. Our research aims are generally encompassed within the themes described below.

A specific focus area of our group’s research is the development of new anti-infective agents. To this end we pursue strategies employing both small- and medium-sized molecules as a means of understanding (and potentially treating) infectious disease, both bacterial and viral.  A specific example of our work in this area includes synthetic approaches to preparing analogues of the calcium dependant antibiotics (CDAs) typified by daptomycin (Figure 1). Daptomycin is one of only three new broad-spectrum antibiotics to have been approved for clinical use in the past 40 years. The complex lipopeptide structure structure of the CDAs and their varied modes of action present a unique opportunity for discovery. Using a combined solid- and solution-phase approach we have prepared a variety of CDA’s, including enantiomeric analogues, which shed new light on the mode of action of these compounds (Angew. Chem. Int. Ed. 2017, J. Med. Chem. 2016, Org. Biomol. Chem. 2014). Work on this project is ongoing with the long-term aims of developing new CDAs with improved activity and in vivo stability. 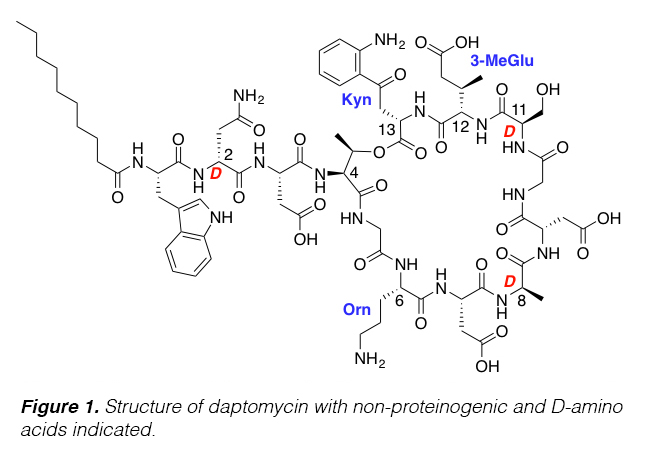 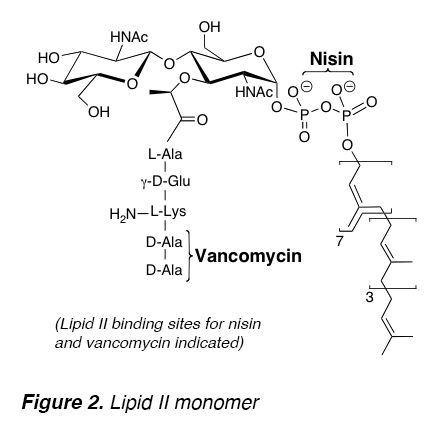 Our group is also interested in developing entirely new classes of synthetic compounds capable of selectively targeting and killing bacterial cells. To do so we apply the tools of both synthetic chemistry and chemical biology to develop novel antimicrobial compounds capable of binding lipid II, the unique molecular building block of the bacterial cell wall (Figure 2). While lipid II has no known role in human metabolism, it is essential to bacterial growth and survival. In bacteria, lipid II is trafficked to the cell surface where it is cross-linked via enzymatic transpeptidation and transglycosylation reactions to generate peptidoglyan, the rigid, polymeric, matrix of the cell wall. Antibiotics such as the β-lactams, glycopeptides like vancomycin, and lantibiotics like nisin target and interfere with lipid II polymerization, effectively impairing bacterial growth. To date we have successfully discovered a number of new compounds that kill bacterial cells via lipid II-dependant mechanisms (Chem.Sci. 2017, J. Am. Chem. Soc. 2015). Ongoing work is aimed at optimizing the activity of these “lead compounds” and fully characterizing their lipid II binding by various biophysical techniques (Biochemistry 2016).

Also under the theme of “anti-infective agents” are our efforts towards developing new anti-viral compounds. In this regard we recently undertook a project aimed at developing new small molecule anti-influenza agents that inhibit the viral neuraminidase enzyme. Oseltamivir (Tamiflu) is a potent neuraminidase inhibitor and has risen to prominence in recent years as an effective first line anti-influenza agent. However, despite its success, resistance to oseltamivir is a growing concern. In response, we recently prepared a series of oseltamivir analogues bearing N-substituted guanidine moieties and tested them  as inhibitors of neuraminidases from four strains of influenza. Potent analogues were identified that displayed enhanced inhibition with IC50 values in the low nM range against neuraminidases from both wild-type and importantly, oseltamivir-resistant strains of influenza (J. Med Chem. 2014).

Theme 2. Epigenetic Targets: N-Methyl Transferase Enzymes
A second major theme in the Martin group involves studying the N-methylation of arginine and lysine residues in various target proteins. These unique posttranslational modifications are performed by specific enzyme families known as the Protein Arginine/Lysine N-Methyltransferases (PRMTs and PKMTs). PRMTs and PKMTs methylate many targets including RNA- and DNA-binding proteins as well as histones. Through this activity, PRMTs and PKMTs influence RNA metabolism and can also act as transcriptional corepressors or co-activators. Along with serine/threonine phosphorylation, and lysine methylation and acetylation, arginine methylation is an epigenetic histone modification that regulates gene expression as part of the histone code (Figure 1). 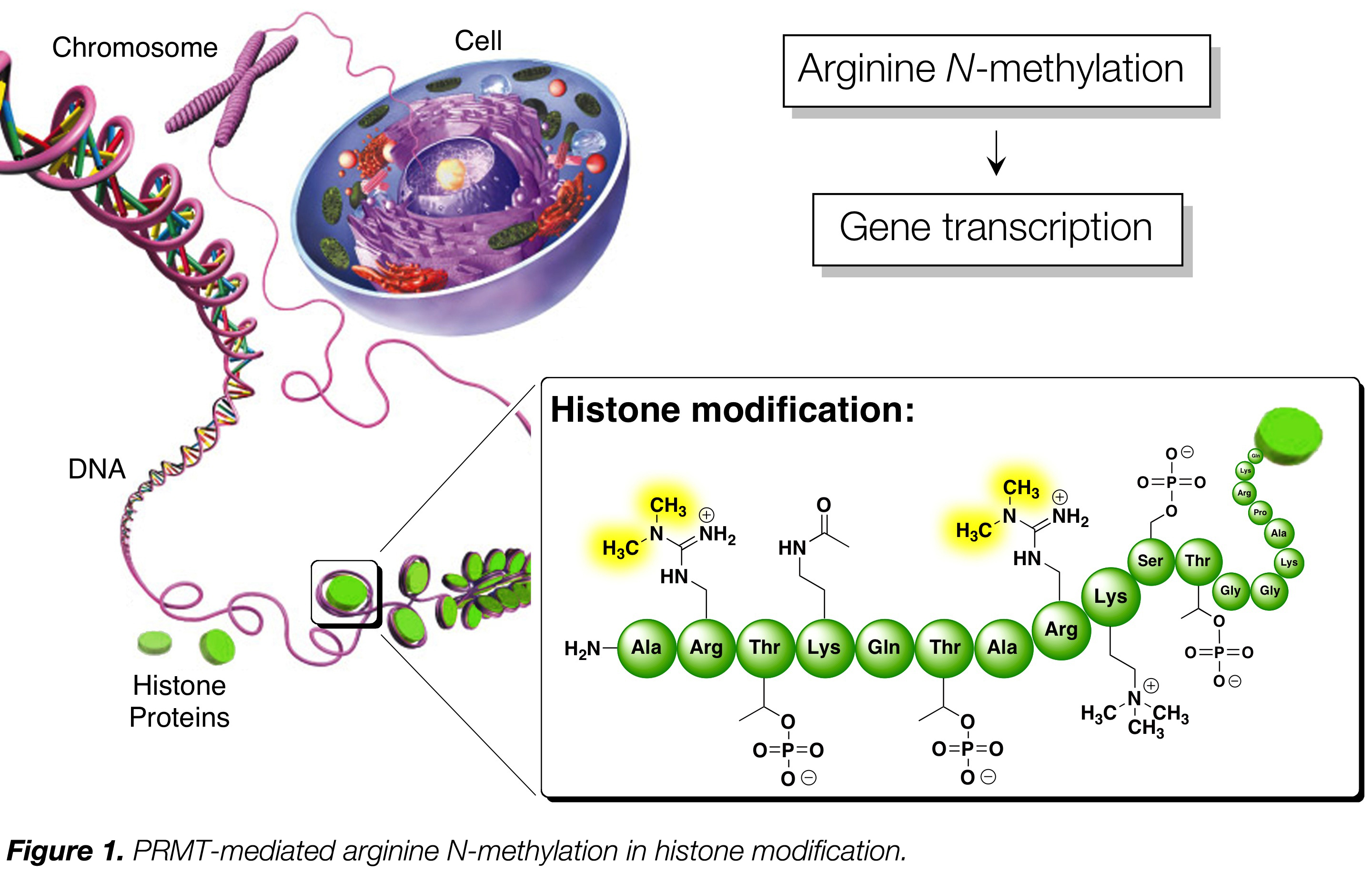 A growing body of evidence now implicates dysregulated PRMT/PKMT activity in a number of diseases including various forms of cancer. The development of PRMT/PKMT inhibitors may therefore hold potential as a means of developing new therapeutics. To this end our group has developed potent, and isozyme-selective, PRMT inhibitors with IC50 values in the nanomolar range. (Proc. Natl. Acad. Sci. 2017, Org. Biomol. Chem. 2015, ChemBioChem 2014).

In addition to our work with the PRMTs and PKMTs, we are also interested in the enzyme nicotinamide N-methyltransferase (NNMT). Rather than methylating protein/peptide targets, NNMT instead methylates small pyridine containing compounds. A number of studies have revealed links between NNMT overexpression and a variety of diseases including many cancers, Parkinson’s disease, diabetes, and obesity. Efforts in our lab have led to the development of a new activity assay for NNMT (Biochemistry 2016) which can also be applied in identifying small molecule inhibitors (Org. Biomol. Chem. 2017).